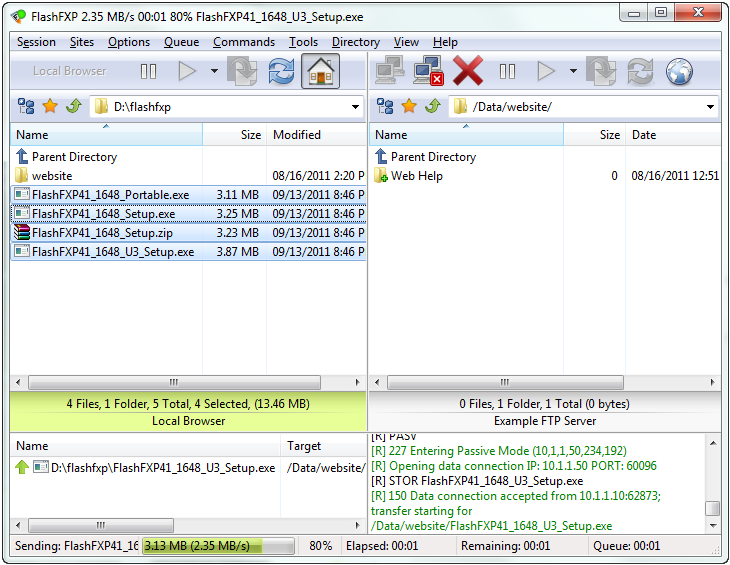 But its really much more than that....

The latest version of FlashFXP can be downloaded from our website at www.flashfxp.com/download

For additional information please visit our website at www.flashfxp.com

To transfer files using FTP, FTPS, or SFTP you must have a client (such as FlashFXP) and a server (where the files are uploaded or downloaded), most web hosting providers provide remote access to upload and download files using one of this methods. Typically the connection is secure.

FTP, or File Transfer Protocol, is a method for exchanging files over a network. By default standard FTP sends passwords in plain text and should be avoided, unless the both the ftp client and ftp server support S/KEY or OTP (one-time password). FlashFXP provides automatic support for S/KEY and OTP but many FTP servers do not support it.

SFTP, or Secure File Transfer Protocol, method for exchanging files over a network, similar to ftp, which performs all operations over an encrypted ssh transport.

FXP, or File eXchange Protocol, This refers to server to server file transfers. You can transfer files from one FTP server to another FTP server using very little of your own bandwidth. This is by far the best means for distributing large files. Due to security concerns most FTP servers disable this feature by default. Some network firewalls, routers, proxy servers, and NAT (Network address translations) implimentations have been known to interfer with FXP and cause unpredictable results, in some cases they'll rewrite the FTP commands (without the user knowing) to transfer the file indirectly through them rather than directly as desired by the user. (some say this is a security feature, others believe its a flaw in their design.) This can sometimes be avoided by running the FTP server on a non-standard port number, such as 2121.